The breeding season of the Yellow-legged gull is ending. Impossible to conduct a full campaign with the anti COVID-19 measures.


Abstract: In many species with continuous growth, body size is an important driver of life-history tactics and its relative importance is thought to reflect the spatio-temporal variability of selective pressures. We developed a deterministic size-dependent integral projection model (IPM) for three insular neighbouring lizard populations with contrasting adult body sizes to investigate how size-related selective pressures can influence lizard life-history tactics.   For each population, we broke down differences in population growth rates into contributions from size-dependent body growth, survival, and fecundity. A life table response experiment (LTRE) was used to compare the population dynamics of the three populations and quantify the contributions of intrinsic demographic coefficients of each population to the population growth rate (λ). Perturbation analyses revealed that the largest adults contributed the most to the population growth rate, but this was not true in the population with the smallest adults and size-independent fertility. Although we were not able to identify a single factor responsible for this difference, the combination of the demographic model on a continuous trait coupled with a life table response experiment analysis revealed how sister populations of the same species follow different life strategies and showed different compensatory mechanisms among survival, individual body growth and fertility.Our results indicate that body size can play a contrasting role even in closely related and closely spaced populations.

The first island has been sampled. Likely we had good weather and animals were collaborating. Looking forward to calculate an estimate of ... 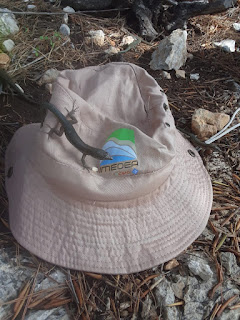