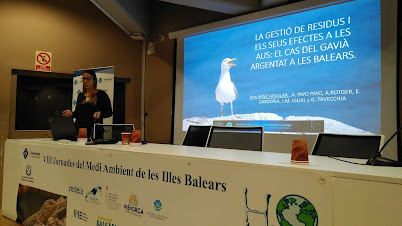 Dr. A. Sanz-Aguilar joined the VII Jornades de Medi Ambients de les Illes Balears (Ibiza). She presented the results of the study of the Yellow legged gull population in Ibiza conducted in 2020-2022.

Email ThisBlogThis!Share to TwitterShare to FacebookShare to Pinterest
Labels: conference

Summary:Background: Integrative studies of animals and associated microbial assemblages (i.e., the holobiont) are rapidly changing our perspectives on organismal ecology and evolution. Insular vertebrates provide ideal natural systems to understand patterns of host-gut microbiota coevolution, the resilience and plasticity these microbial communities over temporal and spatial scales, and ultimately their role in the host ecological adaptation.
Methods:Here we used the endemic Balearic wall lizard Podarcis lilfordi to dissect the drivers of the microbial diversity within and across host allopatric populations/islets. By focusing on three extensively studied populations/islets of Mallorca (Spain) and fecal sampling from individually identified lizards along two years (both in spring and autumn), we sorted out the effect of islet, sex, life stage, year and season on the microbiota composition. We further related microbiota diversity to host genetics, trophic ecology and expected annual metabolic changes.
Results:All the three populations showed a remarkable conservation of the major microbial taxonomic profile, while carrying their unique microbial signature at finer level of taxonomic resolution (Amplicon Sequence Variants (ASVs)). Microbiota distances across populations were compatible with both host genetics (based on microsatellites) and trophic niche distances (based on stable isotopes and fecal content). Within populations, a large proportion of ASVs (30–50%) were recurrently found along the four sampling dates. The microbial diversity was strongly marked by seasonality, with no sex effect and a marginal life stage and annual effect. The microbiota showed seasonal fluctuations along the two sampled years, primarily due to changes in the relative abundances of fermentative bacteria (mostly families Lachnospiraceae and Ruminococcaceae), without any major compositional turnover.
Conclusions:These results support a large resilience of the major compositional aspects of the P. lilfordi gut microbiota over the short-term evolutionary divergence of their host allopatric populations (<10,000 years), but also indicate an undergoing process of parallel diversification of the both host and associated gut microbes. Predictable seasonal dynamics in microbiota diversity suggests a role of microbiota plasticity in the lizards’ metabolic adaptation to their resource-constrained insular environments. Overall, our study supports the need for longitudinal and integrative studies of host and associated microbes in natural systems
at January 03, 2023 No comments:

New publication on climate and sex-ratio!

Abstract: Sea turtles have temperature-dependent sex determination. Because females are produced at high temperatures, increasing global temperature may lead to population feminization. Primary sex ratios (PSR) of sea turtle hatchlings are naturally female-biased, but this translates into a more balanced operational sex ratio because male turtles reproduce more often than females. As a consequence, a balanced PSR and the temperature that produces it (pivotal temperature) are of limited use to guide climate mitigation management because an equal PSR may be demographically suboptimal.

Here, I define population-advantageous primary sex ratios (PA-PSR) as the PSR that will tend to be in equilibrium in a population and that will result in balanced operational sex ratios; I then estimate PA-PSR for different reproductive frequencies (years elapsed between reproductive seasons) of adult female and male turtles. I also define population equilibrium temperature (PET) as the temperature that would result in the equilibrium PSR of hatchlings (i.e., PA-PSR). These concepts may help assess the influence of rising temperatures on populations, as they can better indicate if PSRs depart from those at equilibrium. I compared PA-PSR and beach PSR for two populations of sea turtles for which male and female remigration intervals were known and found that a mild or no feminization over the PA-PSR may be occurring. Because PSR varies inter-annually, and hatchlings coming from beaches of different thermal conditions could recruit to the same population, it is critical to estimate beach PSR at the right temporal and spatial scales. Climate mitigation strategies based on these concepts could provide better management guidance for conservation practitioners. Similar approaches could be considered for other female-biased species with temperature-dependent sex determination.

This fall the GEDAi joined the 25th Spanish Ornithological Congress.

A. Sanz-Aguilar was on the scientific committee. A. Santangeli and S. Bolumar made a poster presentation of their work and projects.

Summary: Early life conditions, especially in long-lived organisms, can have both immediate and long-lasting effects in vital traits generating demographic structure across cohorts. Multiple non-exclusive hypotheses have been proposed to explore this question. For instance, the silver spoon, the viability selection or the predictive adaptive response hypothesis, predict that long lasting effects resulting from harsh early conditions could be negative, positive or vary with current environmental conditions, respectively. 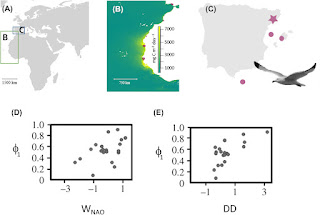 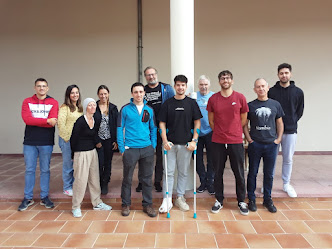 The 2022 Workshop on capture-mark-recapture and- recovery data applied to conservation of animal populations ended today! It has been an interesting and stimulating workshop. This year we had datasets on vultures, trouts, dolphins, sharks, gulls ... We always learn new systems, new challenges, new studies and more important new persons.

Thanks to all for coming!

Are you interested in obtaining a Ph.D. on seabirds ecology ? The La Caixa Foundation grants 65 fellowships for talented early-stage researchers of any nationality to pursue their PhD studies in Spain or Portugal.  Apply at   https://fundacionlacaixa.org/en/inphinit-doctoral-fellowships-call and select our project. Find our project on seabirds (here) and join the GEDAi

Seabirds are in rapid decline worldwide, but the relative importance of the multiple threats to their populations is not always clear, nor the birds’ response to current global changes.  As top-predators their behavior, dynamics and life-history strategy reflect ocean state and condition and their decline is showing that the marine ecosystems is changing.

The research project aims to investigate the life-history strategy of seabirds under the current chemo-physical changes of the ocean. The project will take advantage of the long term monitoring databases collected by the team and the data collected by GPS and GLS devices to follow birds during their foraging movements and migratory routes. It will focus on two species of conservation interest, belonging to the order of Procellariformes, the European storm petrel Hydrobates pelagicus and the Scopoli’s shearwater Calonectris diomedea. Birds will be studied in the Balearic archipelago and Alicante region (Eastern Spain). The deployment of tracking devices will allow to investigate the individual and the species-specific movements in order to detect the important foraging and overwinter areas to help policy makers to reduce the threats to their populations.

If you need more information on the project: g.tavecchia-at-uib.es

Dr. A. Sanz-Aguilar joined the VII Jornades de Medi Ambients de les Illes Balears (Ibiza). She presented the results of the study of the Yel...