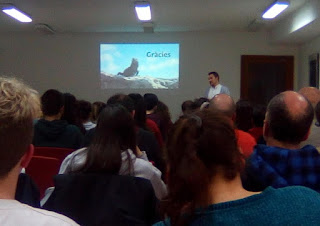 Dr A. Rotger spoke of the Balearic Wall Lizard at the "Darrer Dijous" conferences.
A great initiative organized  by the Balearic Ornithological Group (GOB) to popularize scientific research.
at February 23, 2018 No comments:

APHIS under the spotlight ! 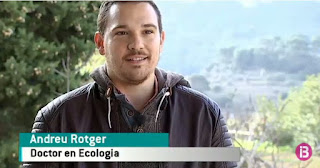 The software APHIS for individual photo-identification developed by the GEDA in collaboration with Dr. Ó. Moya (Fundacion IBIT) was on IB3 news today! 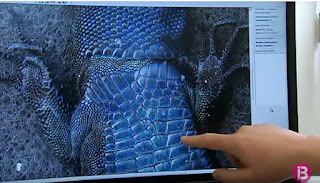 APHIS builds on an existing approach (I3S) adding the possibility to process photos in batches and the original ITM procedure which minimizes pre-processing time.

You can see the interview here.
A press release from IMEDEA here

The software can be downloaded for free here.
at February 19, 2018 No comments:

GEDA at the Seabird Group Conference! 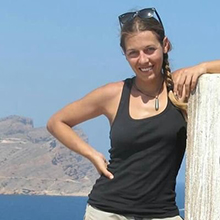 The next Seabird Group Conference at the University of  Liverpool the 3-6th September 2018 will have A. Sanz-Aguilar among the keynotes speakers. We will keep you posted.
.

GEDA at the "International Day of Women in Science" !

Ana Sanz-Aguilar from the GEDA has participated at the "International Day of women and girls in Science" explaining her current research on seabirds. 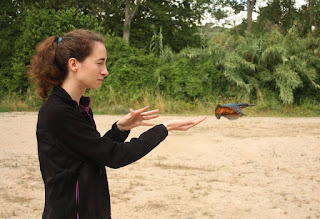 Nerea Prieto Landeta is beginnig her Ph.D. in "Biodiversity, Functioning and management of Ecosystems" at the University of the Basque Country (UPV/EHU) working on the management of the Eurasian Woodcock Scolopax rusticola in Northern Spain. Nerea will conduct her work on a part-time basis under the supervision of Dr. J. Arizaga and Dr G. Tavecchia. Welcome Nerea!

Abstract. Predators are an important ecological and evolutionary force shaping prey population dynamics. Ecologists have extensively assessed the lethal effects of invasive predators on prey populations.However, the role of non-lethal effects, such as physiological stress or behavioural responses like dispersal, has been comparatively overlooked and their potential population effects remain obscure. Over the last 23 years, we developed a mark-recapture program for the Audouin’s gull and an intensive carnivore monitoring program to assess how the appearance and invasion of the study site by carnivores affects population dynamics. We evaluate changes in turnover of discrete breeding patches within the colony, age structure and breeding performance.
Once carnivores entered the colony, the number of occupied patches increased, indicating a higher patch turnover. Breeders responded by moving to areas less accessible to carnivores. More importantly, the presence of carnivores caused differential (and density-independent) breeding dispersal: experienced, better-performing breeders were more likely to leave the colony than younger breeders. This differential dispersal modified the age structure and reduced the reproductive performance of the population. Our results confirm the importance experience in the study of populations. The role of differential dispersal for animal population dynamics might be more important than previously thought, especially under scenarios of global change.
at February 01, 2018 No comments:

JAE Fellowship with the GEDA

The GEDA offers a training on Animal Ecology within the JAE fellowship program 2020, sponsored by the “Consejo Superior de Investigaciones C...