Master on Marine Ecology with the GEDA

M. Martin Perez and M. Castell from the University of the Blearic Island, and A. Sola from the University of Santiago began their Final Work (TFM) for their Master Degree on Marine Ecology with the GEDA.
Maria will be focussing her research on the response of Cory's Shearwater to climatic changes, Marga will experimentally evaluate the recruitment behaviour of Storm Petrel and Alfonso will study the foraging strategy of the Yellow-Legged Gull. They will be supervised by A. Sanz-Aguilar, G. Tavecchia and J.-M. Igual.
Their respective fieldwork campaigns are on the starting blocks !

New Publication on Petrels and Shearwaters: where are we and where to go

Abstract: Shearwaters and petrels (hereafter petrels) are highly adapted seabirds that occur across all the world’s oceans. Petrels are a threatened seabird group comprising 124 species. They have bet-hedging life histories typified by extended chick rearing periods, low fecundity, high adult survival, strong philopatry, monogamy and long-term mate fidelity and are thus vulnerable to change.
Anthropogenic alterations on land and at sea have led to a poor conservation status of many petrels with 52 (42%) threatened species based on IUCN criteria and 65 (52%) suffering population declines. Some species are well-studied, even being used as bioindicators of ocean health, yet for others there are major knowledge gaps regarding their breeding grounds, migratory areas or other key aspects of their biology and ecology.

We assembled 38 petrel conservation researchers to summarize information regarding the most important threats according to the IUCN Red List of threatened species to identify knowledge gaps that must be filled to improve conservation and management of petrels. We highlight research advances on the main threats for petrels (invasive species at breeding grounds, bycatch, overfishing, light pollution, climate change, and pollution). We propose an ambitious goal to reverse at least some of these six main threats, through active efforts such as restoring island habitats (e.g., invasive species removal, control and prevention), improving policies and regulations at global and regional levels, and engaging local communities in conservation efforts.

Abstract: Bird migration studies have been given added impetus recently thanks to the miniaturisation of tracking devices. However, tracking methodologies have remained impractical for the smallest pelagic species and so important gaps in knowledge still exist. In the case of the European Storm-petrel Hydrobates pelagicus, while Atlantic populations are thought to overwinter along the south-western African coast, the winter quarters of Mediterranean birds remain more enigmatic. We performed stable isotope analysis (SIA) of C and N on P1, S8 and P10 feathers from 33 adult birds captured in three Atlantic colonies and 156 adult birds in seven western Mediterranean colonies to infer their wintering areas.
In addition, we collated all observational field data, both from peer-reviewed publications and the wider literature, to complement our inferences from SIA. Within the Atlantic, isotopic profiles of feathers moulted at the breeding grounds (P1) differed between birds captured at northern Atlantic and Canary Islands colonies, but were similar for feathers moulted in winter quarters (S8 and P10), indicating low migratory connectivity. Isotopic values of feathers from western Mediterranean birds differed from those of Atlantic birds and showed Mediterranean values for all feathers, indicating that the former overwinter in Mediterranean waters. Variance in the isotopic values was greater in winter than in breeding season feathers, suggesting that birds disperse over larger areas in winter. Isotopic values of feathers moulted during the non-breeding period could match a post-breeding movement towards the southern and eastern Mediterranean. This inference matches the distribution of the few winter reports, which are mainly concentrated in the south-central Mediterranean, mostly in the Tunisian Platform. Our results suggest that this region is the principal wintering area of Mediterranean Storm-petrels.—Martínez, C., Roscales, J.L., Sanz-Aguilar, A. & González-Solís, J. (2019). Inferring the wintering distribution of the Mediterranean populations of European Storm-petrels Hydrobates pelagicus melitensis from stable isotope analysis and observational field data.

A press release by SEO BirdLife here
at March 18, 2019 No comments: 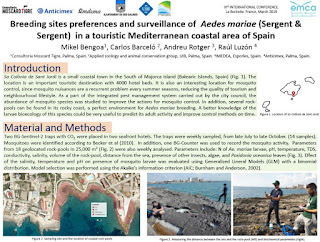 A. Rotger from the GEDA co-authored a work on small-scale presence and habitat selection of the mosquito Aedes mariae on the south of Mallorca Island. The work was presented as a poster at the IXth International Conference of the European Mosquito Control Association in La Rochelle. and awarded as  the best poster of the conference. 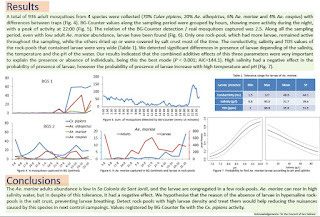 Other publicacions on Tiger Mosquito Aedes albopictus distribution and habitat preference on Mallorca Island can be found here and here. 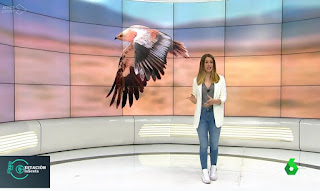 The work by A. Sanz-Aguilar and colleagues (here) was presented on National TV (LaSexta channel, Estacion La Sexta 25/02/2019). 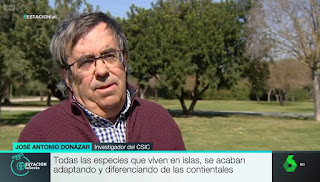 The report correctly insists on education as a key factor for the success al effort in wildlife conservation programs.  The egyptian voluture in Canary Islands is a successful example of scientific-based conservation actions conducted in parallel with educational programs.

Abstract: Dispersal propensity has been correlated with personality traits, conspecific density and predation risk in a variety of species. Thus, changes in the relative frequency of behavioural phenotypes or in the ecological pressures faced by individuals in contrasting habitats can have unexpected effects on their dispersal strategies. Here, using the burrowing owl Athene cunicularia as a study model, we test whether changes in the behavioural profile of individuals and changes in conspecific density and predation pressure associated with urban life influence their breeding dispersal decisions compared to rural conspecifics. Our results show that breeding dispersal behaviour differs between rural and urban individuals. Site fidelity was lower among rural than among urban birds, and primarily related to an individual’s behaviours (fear of humans), which has been reported to reflect individual personality. In contrast, the main determinant of site fidelity among urban owls was conspecific density. After taking the decision of dispersing, urban owls moved shorter distances than rural ones, with females dispersing farther than males. Our results support a personality-dependent dispersal pattern that might vary with predation risk. However, as multiple individuals of two populations (one urban, one rural) were used for this research, differences can thus also be caused by other factors differing between the two populations. Further research is needed to properly understand the ecological and evolutionary consequences of changes in dispersal behaviours, especially in terms of population structuring and gene flow between urban and rural populations.

JAE Fellowship with the GEDA

The GEDA offers a training on Animal Ecology within the JAE fellowship program 2020, sponsored by the “Consejo Superior de Investigaciones C...